One of the remarkable things we discovered on the Camino is the way people suddenly come into your life with a purpose and a message. At first it seemed as though these encounters were just the usual passing acquaintances we experience in everyday life. But when we had a moment to reflect further they seemed almost scripted, set in place, as signposts, to lead us somewhere. We all meet people throughout our lives but the Camino seems to shine a spotlight on these encounters. Perhaps it is because there are so few distractions. In the end it is just eating, sleeping and walking. Pretty simple life, right. Let's see. 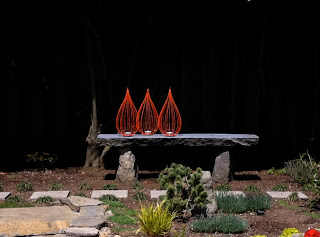 As I was warming in the flickering glow of the fireplace this morning (spring here in the Pacific northwest is still unseasonably cold and wet) thinking about this post I thought of a satellite looking down on the Camino tracking all of the many pilgrims unaware of its presence. But patterns could be discerned as tiny figures inched towards meeting places and each other. This thought of people from all corners of the earth and all walks of life moving inexorably towards some place where their lives were going to intersect and somehow be changed was striking. Robin and I met several people while we were on the Camino and we realized that from each of those encounters a message was passed and wisdom was gained. All we had to do was put our story on hold and listen. And listen we did. A Spanish pilgrim who emerged out of nowhere and disappeared again but not before passing on his message of the importance of kindness to others and sharing while on the Camino. Was this meant for us specifically? Who could know, but the message holds universal truth and deserves to be passed along even as a reminder. Thank you, mysterious pilgrim.

Another encounter was with a Japanese man living in a small Spanish village. He saw us in a bar and pursued us with kindness (sharing food and drink) and eventually pulled a chair up to our table. He had a tale to tell and it could not be contained. His story centered on a woman back in Japan who he was in love with but his need to get free from the constraints of the Japanese culture caused him to flee to rural Spain leaving a heartbroken women behind. She begged him to return, he would not answer her letters. She sent him airline tickets. He sold them to cover his bar tab. In short he erased her from his life. Now almost forty years later he is haunted with guilt for the way he treated this woman. He never reconciled with her and she eventually died. His sadness was visible and his need to get this story out was palpable. Why us and why now? We were just pilgrims sitting in a bar. Again, who knows but his message was clear. Always reconcile the many differences we experience in life. The burden, if you don't, is simply crushing. Wow.

Another memorable encounter was with a young South African man, Derick, in Ruitelan. We met walking but shared much more over a couple of glasses of beer in a bar on the flanks of O'Cebreiro. The fading afternoon light had brought a chill to the mountain air but inside this small bar our worlds warmly comingled as our messages were passed along. This was like a transfusion of energy and purpose as we worked through the why of our meeting and the impact on the way ahead. I always find these situations fascinating and intriguing. And I can't help but wonder why they happened?

A final thought. One afternoon, as we walked through occasional rain showers on the road to Muxia, we hailed a passing car and asked for directions. The driver, an elderly farmer, told us to go the "cruz " and turn left. Well in Spanish the word for cross is also the word for intersection. Perhaps this symbol, the cross, which for centuries has been a source of spirtual comfort and guidance for beleaguered pilgrims also reminds us that, whenever our lives intersect (cross) with others, we form a community of seekers looking to one another for help with our journey while sharing the hope of  finding healing, wisdom, and grace. The cross always beckons, but it's mystery is only unlocked when we choose to respond.

Buen camino
Posted by Kialoa3 at 7:15 AM