On our previous Camino I kept our blog by using those coin operated computers that could be found in various locations. That was a very inconvenient solution. These days, with WiFi popping up almost everywhere, I chose to carry an iPad mini (10.25 ozs. including a magnetic cover). This worked out quite well. We were able to find WiFi almost every day except in the more remote mountains areas. Most municipal albergues do not have WiFi, but many private ones do. As I recall it was only the albergue in Burgos that had WiFi, but that was because the city provided the coverage. You have to go to the Tourist Office by the cathedral to register and get a password. But, many bars and restaurants now provide coverage. Always ask as many places that you might think would not have WiFi, surprisingly will have it.

I use Blogger as our blog platform. It's mobile application is not very user friendly, so I downloaded an app called Blogsy to create, and edit posts. Blogsy worked very well. You can do everything offline and save multiple posts, with photos, until you find a WiFi connection to upload them. I was going to try and add some video clips but Blogsy is a bit clunkier (as I recall) when it come to adding video to your post. Photos are a snap. I found that composing the post and placing the photos was easier with the WiFi turned off. If it is left on then you have another step to go through, uploading selected photos to a hosting site. I didn't spend a lot of time trying to see if I could work around that, as switching the WiFi off allowed me to place photos directly from iPad photo directory. I never had any bug issues. Blogsy worked as advertised. Initially I had some concerns over the extra weight of the iPad but those concerns faded almost immediately once I started using it. This is my posting solution until something better comes along. Just a short side bar on pack weight while we are discussing this. I can be obsessive about pack weight. However, I discovered on this Camino that carrying what you need is more important then shaving a few ounces here and here. Of course you do not want to wind up with a forty pound pack, but a couple of pounds here or there will not make any difference. The sooner you stop agonizing over pack weight, the sooner you will accept whatever it is, and just carry it. I always found that putting on the pack in the morning was the time I noticed its weight (18-20 pounds). Once out the door and on the Camino, other things occupied my mind and pack weight wasn't one of them.

I considered using Robin's iPhone, or the iPad, as our primary camera, but the photo quality I wanted called for a proper camera. One thing I have noticed is that the iPhone, and the iPad, take some pretty nice video. In the end I carried the same Sony camera I used on our last Camino and it was great. Again, it is a bit more weight, but it was well worth it. I used an SD card reader to transfer photos from the camera to the iPad. This is a very short and light cable that worked perfectly. 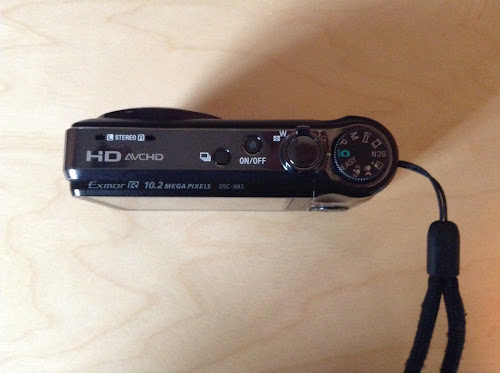 I will close with a final encouragement to document your Camino in some way. Whether you choose to blog, or keep a journal makes no difference. You will be drawn back to what you have written time and time again. Also, take lots of photos. You will be surprised how much you will enjoy looking at them long after your Camino is over.

Posted with Blogsy
Posted by Kialoa3 at 9:42 AM