Robin and I have now been home for a little over a week. The trip home went smoothly. Even the "back of the bus" seats on the Delta flight from Amsterdam to Portland did't seem too bad. Perhaps it was simply the reality that we would soon be back in our own home that made us more accepting. The big story for this pilgrimage was Robin's foot problem. She has since visited her doctor and x-rays were taken that revealed a bone spur. This spur (not necessarily a pointy protrusion) has caused the nearby tendon to inflame which caused the pain she experienced. So going forward she has to use orthotics in her boots and other walking shoes. She has been told to avoid total rest. It apparently is better for the healing process if she engages in some moderate use of her foot. So she will proceed cautiously and just see how it all goes. We have no plans to return, in the near term, to the camino so she will have time to rehabilitate her foot. It is our hope that she will eventually be able to walk at least some shorter camino routes, but only time will tell. We are hopeful that this condition can be managed and our backpacks will be slung once again. Robin is on this, and if there is a way she will find it. 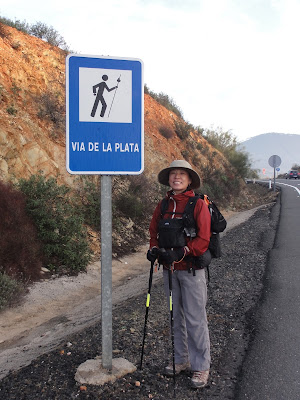 A few thoughts now about the Via de la Plata. This was our first time walking this route and we were pleasantly surprised at what we encountered. It is a beautiful camino. There are many flat sections that are sort of Meseta like, and those might not be everyone's cup of tea, but we enjoyed them. The trail marking and surface condition was surprisingly good. There are several arroyos scattered along the route that have to be crossed and depending on the weather (rain) keeping your feet dry might be challenging. Fortunately, we had no problems as the weather was quite dry. We elected to taxi to Guillena and start walking from there. We are not fans of long urban exits or arrivals, and the arroyo issue admittedly also played a role in our decision to skip the first stage. As it turned out, even though the weather had been quite dry, the two arroyos that had to be crossed in the first stage were quite full and required deviations (this from another pilgrim who walked from Seville).

Regarding accommodations we stayed mainly in private lodging (hotels, pensions, casa rurals). We stayed in some albergues when that was all that was available, and some were quite nice. Our only bottom line requirement was heat. If there was no heat available we moved on. It was quiet in November, but we were not totally alone. We fell in early on with a small group that eventually scattered and then we carried on mostly alone after that. We met one fellow outside of Ourense who had walked from Valencia, and he said we were the first pilgrims he had met. 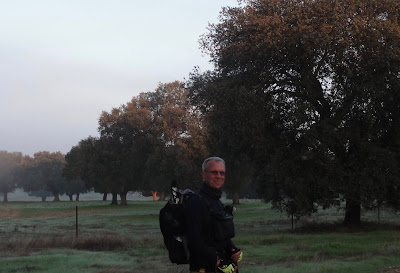 Robin's foot problem forced us to skip the walk from Puebla de Sanabria to Ourense (about a week). We then, after a couple of day's rest,  tried pushing on from Ourense but that only worked for part of that section. Eventually, Robin walked from Silleda to Ponte Ulla, and that ended any hopes of walking further. Even though we were just a day's walk from Santiago, it was not going to happen. So we offered thanks for what we had been able to accomplish, and then took a taxi into Santiago.

Our initial plan was to arrive in Santiago about five days before Christmas. As it turned out we were there for two weeks. Now remember Robin was still very much limited to what she could do. Sitting around a hotel room icing her foot was not her idea of a grand vacation. We both had to reach an accommodation with the situation, and we did. The days passed slowly with resting, icing and sipping a bit of wine. Eventually Robin felt she could walk a bit so we would set out for short excursions around the town. This helped a lot. As Christmas approached Robin began practicing with John Rafferty and Stephen Shields to get ready for the upcoming Christmas masses at San Agostin where the three of them would be providing the liturgical music over Christmas. These are two wonderful people and we are very pleased to call them friends. This lifted Robin's spirits exponentially, and mine as well.

The Christmas season in Santiago is quite a bit more subdued then what we are use to in America. Decorations and seasonal music are only minimally indulged in. It seems more focused on families gathering for holiday meals than anything else. Now this leads me to the part about John and Stephen preparing meals for Robin and I and a few other friends at John's home. This was always going to be part of our Christmas together, but I had no idea what was forthcoming. We all gathered at John and Stephen's after the Christmas eve mass, and after the Christmas day Masses (2). On both occasions all hands were treated to banquet worthy meals that just never stopped. The holiday tables were beautifully arranged and the food and wine were both abundant and superb. The gaiety and laughter only served to top the cake (actually Christmas pudding, aflame). So, even though we struggled a bit on the camino, the joy we found in this very special Christmas celebration carried the day, and our hearts. A final tip of the hat to John and Stephen for the huge effort this all required, and to Rebekah, Paddy, and Kathy, for their exceedingly good company. A special note of praise for Robin's grace under pain through all of this. She sang beautifully and kept us smiling when I am sure she was hurting. She is my Pilgrim Robin, and I love her dearly.