Robin woke me this morning and asked if I had heard the rain last night. I had ear plugs in and was lost in a novel. She said it had been very stormy with high winds and pounding rain. This was news to me. I went to the albergue window and saw nothing but stars. Perhaps the front had passed and we could now enjoy clearing weather. We got ourselves together and made it out the door at 9:00. The heavy rain gave us some concern regarding the condition of the "delightful woodland trail" portion of today's walk. Initially we did fairly well, but soon thereafter the Camino became a boot swallowing bog. Thank God we were able to make our way back onto the road fairly quickly. If we had tried to walk the Camino path, we would still be out there in the dark, feet soaking wet, plodding along at 1 mph. 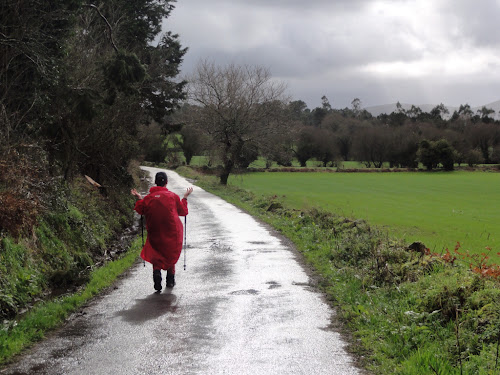 We met one Spaniard as he was pulling out of his driveway and he said the road was the better way to go. We could not have agreed more. The weather at the start of the day was quite nice. We slowly picked our way up he Camino, rock hopping, and wall climbing to find our way clear of the mud and standing water. This was very slow going and on a day where we had to cover 33 kms, we simply could not continue at this pace, and get in before dark. So, with these conditions, we became instantaneous champions of the carretera. The second half of the day had fewer "woodland trails" and those were in much better condition. The weather was mostly scattered showers during the second half of the day, and some of them were surprisingly intense. We even had a cloud swing by and spray us with hail or ice pellets. The wind was tending more out of the north and that kept the temperature a bit cooler, but not uncomfortably so. We walked with our usual t shirts, base layer, and a poncho (on and off). We wore no gloves or buffs. Temps were generally in the upper 40's. We would be plodding along in reasonable weather and then quickly the sky would darken, the rain would start, and the wind would try to blow us off the road. 15 minutes later the tape would rewind and we would be back plodding along in reasonable weather. This was the story of our day. Lots of kilometers to walk, and very changeable weather. We walked into Olveiroa at 4:50, after almost 8 hours of walking. We are bedded down at the Pension Casa Loncho. We had a trying day, but arrived safely, albeit, with a few new aches. We have just finished dinner at the restaurant As Pias, and are calling it quits after this. There is a good WiFi signal here at the restaurant so I will post this and then head off to bed. A short day tomorrow to Cee (15kms +\-). Sounds good to me.

Posted with Blogsy
Posted by Kialoa3 at 11:54 PM