In retrospect: The Camino Norte 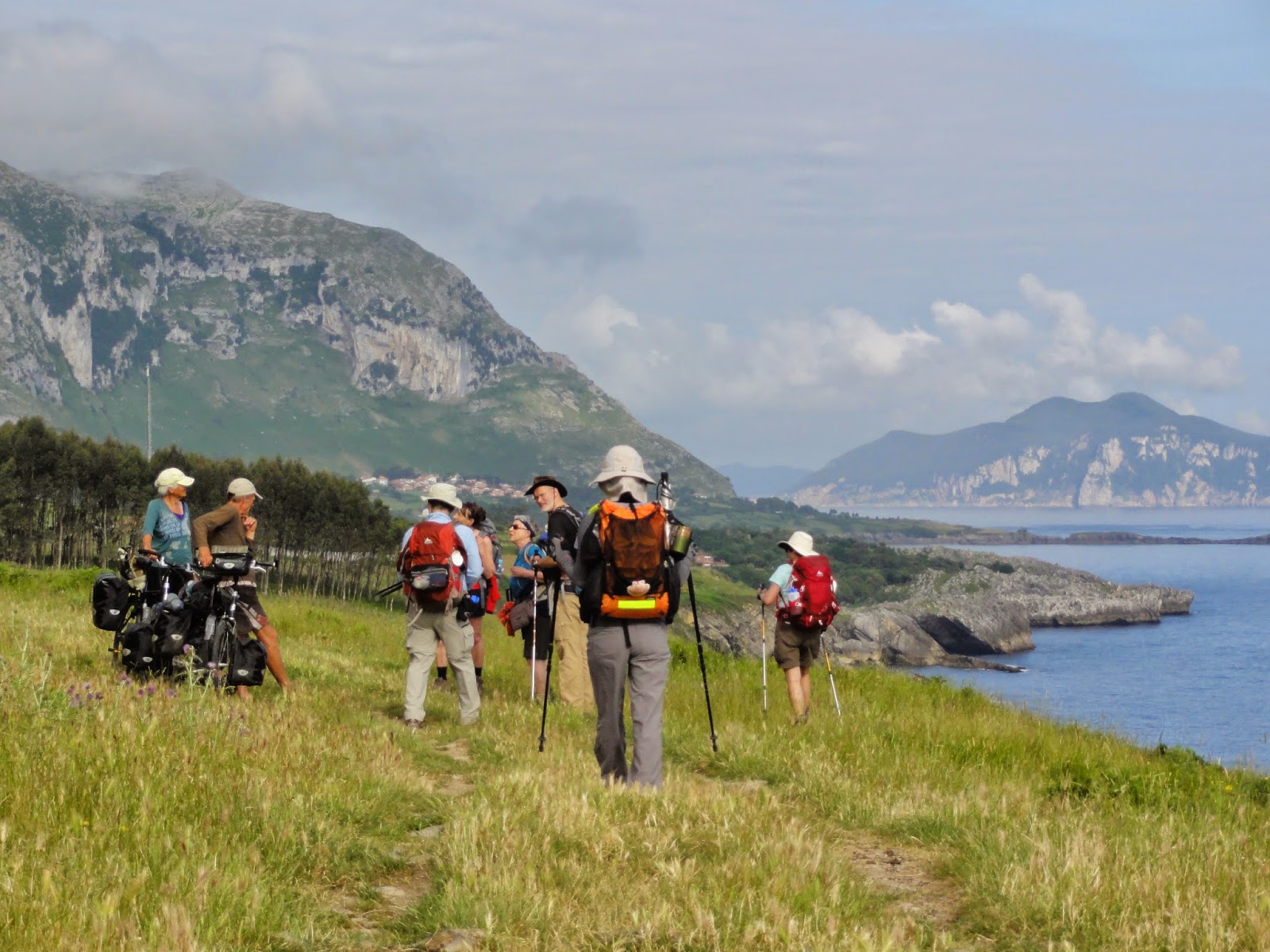 We had never intended to walk the entirety of the Camino Norte. The Camino Primitivo was always our first choice for getting to Santiago. That being said the Norte had some surprises for us. First, it has some gorgeous scenery to enjoy. The terrain starts out quite varied, and includes many climbs and descents as you walk into and out of coastal towns. Having joined this route after walking from Le Puy the climbs were not a problem. Robin had some leg problems back on the Le Puy route so we were cautious about how much strain was put on her legs, but she was always able to handle the terrain. Many people single out the elevation gains both on the Chemin St. Jacques, and the Camino Norte for special caution. There certainly are many hills to go up and down, but the Camino Frances has them as well. One could argue that on any given day there are more on one route versus the other, but what's the point. If you are in reasonable shape you will complete any of these routes. You certainly can up your happiness quotient by training a bit more, and watching your pack weight, but these are universally true whenever, and wherever you set out to walk. The first day's walk from Irun takes you up a hill that has a low route, and a high route (Purgatorio Route). The high route offers expansive views of the sea, as long as the weather is fair. I would not recommend the high route, if the view isn't there. The trail is quite narrow and follows a ridge where you are exposed to the weather. If the weather is bad, you have no view, you are being blown around, and your happiness quotient just took a dive. The lower route is a sheltered path with interior mountain views. Your choice.

The numbers of pilgrims on the Norte seemed manageable. Typically we were seeing 15-24 people in a day. But, there were days when the crowds thickened, and that was usually associated with arriving in a town with more beds. Makes sense. The most I ever heard of was a crowd of about 80 at Guemes. We were with about 35 (or so) other pilgrims when we stayed there. The Norte runs through many tourist areas, and those towns typically have a large variety of lodging (if you have some extra cash). The albergue beds can go quickly in some towns, so allowing for a bit more in your travel budget might be prudent. But, the Norte is definitely a lot quieter than Camino Frances, even in peak season. We stayed in a few albergues, but mostly we chose private accommodation. Just a personal choice. We never had any lodging problems.

The weather, much like the time we spent on the Chemin St. Jacques, was mostly fair and dry. However we did have some rain, and that caused a bit of a problem as we departed the monastery just outside of Bolibar. The trail you follow is an old logging road, with huge tractor ruts. Once this softens up it is a slog. The descent down is also tricky as the trail becomes steep, rocky, and slippery. If it was a wet day I would avoid that trip through the woods, and find alternate transpiration to Guernica. We did skip the stage from Guernica to Bilbao due to the trail conditions we experienced en route to Guenica. We just decided to give the camino a day to dry out. However, after that, we never had a problem. Just a quick word about whether to abandon the trail or not. Walking a long distance requires continuous assessment of the trail you are following. If that trail becomes unsafe due to the prevailing weather, then by all means find safer ground. It will do you no good to get injured just trying to tough it out. Be sensible, and evaluate the risks you are exposed to before deciding when, and where to walk. Enough said.

Another discovery was the amount of road walking we experienced on the Norte. It seemed like after the first week we were hitting the pavement with increasing regularity. In many cases that meant walking most of the day (6-7 hours) on paved roads. Normally, I don't mind the occasional road, but when you walk roads all day long, and then repeat that time, and time again, it becomes hard on your feet, and your body. Heavy traffic, with little or no shoulder, was also a problem on some of the roads. Not good.  One surprise that caught me was the feeling that this route was more like a hike than a pilgrimage. I suppose some people think, what's the problem? Robin and I walk as pilgrims,  not as tourists. Yes, we can become tourists for day when we are enjoying some time off, but our journey always involves our faith, and its strengthening. For us this route just had a different feel to it in that regard. Maybe that is unfair, and it was just the place where we were, as individuals, that caused this feeling. Perhaps the second half (which we did not walk) is different. I'll probably never know. The Norte does not disappoint on the scenery, but in the end we were looking for something more than that. The Primitivo, which I'll talk about next, filled that void.
Posted by Kialoa3 at 2:13 PM