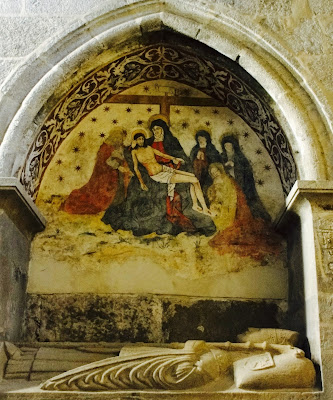 As our time in Santiago volunteering with the Camino Chaplaincy drew to a close Robin and I took a couple of days to reconnect with a Basque friend, Zazpi, who we met on our Camino Ignaciano this past January. He lives in a small village called Agurain, which lies about 20 minutes east, by car, from Vitoria-Gasteiz. We pondered renting a car, but in the end we opted for the train and that worked out just fine.  It was an inter-city train that took 9 hours to get from Santiago to Vitorio-Gasteiz (just the same time it takes to fly from Amsterdam to Portland, Oregon). It was an older train, but comfortable, and the time passed surprisingly quickly. Mostly our time was spent reading and watching the passing scenery. We arrived in Vitoria around 7:30 pm and walked 7 minutes to our hotel, the Canciller Ayala.  Our friend, Zazpi does not speak any English but his friend, Jose Mari does. Jose Mari was with Zazpi when we met them in January. The plan was for Jose Mari to pick us up and drive us to Agurain. He had a family engagement in Pamplona so, sadly, he could not spend the day with us. However, Zazpi's son, Mikel, does speak English and he agreed to accompany us for the day. So, it all worked out. Jose Mari was out in front of our hotel at 8:00 am sharp and off we went. It was wonderful to see this very happy guy again. He works for a Japanese company in Vitoria that specializes in manufacturing automation. He is one of those fortunate people whose face always defaults to a smile. We passed the time and before we knew it we were parked in front of a coffee bar in Agurain and our amigo, Zazpi, was at the curb waiting for us. Zazpi is a recently retired banker whose passion is simply being outdoors. He hikes daily and also rides his bike a lot. He is always going somewhere under human power. Keep in mind Zazpi, Robin and I share no common spoken language, but that did not restrict us. We chatted and gestured and clearly shared the joy of being together once again.

Zazpi and Jose Mari were out walking, as is their habit on a weekend, this past January, when Robin and I came up a trail shuffling through the snow quite taking them by surprise. Jose Mari quickly translated for Zazpi that we were walking the Camino Ignaciano (which he knew of). He couldn't quite figure out why we were doing it in the winter but that got sorted later as Jose Mari passed along that it was our preference to walk in the colder months. Long story short, these guys took us under their wing and led us along the recently revised camino trail. It happens to now pass quite close to a very steep cliff edge. As we were gingerly making our way along Zazpi asked Jose Mari to see if we wanted to visit a "holy place". He said it was very close to the camino path, so off we went full of curiosity. Zazpi and Jose Mari had two friends who belonged to the same hiking club. They had passed on and there ashes were scattered from a promontory along this cliff where we were walking. This was the "holy place". This place has become a kind of shrine for them. They honor the passing of their friends each year by organizing a major hike up to the "holy place" and a big lunch afterwards. They gather about a hundred people each year to do this. Robin was carrying a personal intention for a family who we are close to. Robin asked Zazpi if she could leave this remembrance at the "holy place." Zazpi, without any hesitation, said of course, so off we went. This is how our friendship was formed. Four people from opposite sides of the world met on a mountaintop in the Basque Country in January and a kindness was offered with no conditions imposed. It was a stunningly beautiful camino moment. Now a prayer card from a Portland family, who recently lost a son, is include in a mountain top shrine simply because of a random act of kindness. So this is why we have traveled 9 hours by train for basically a one day visit. These guys really made an impression on us. They are very nice people and we are truly blessed to call them friends.

So, that is a bit of the back story, but now let's return to our trip from Santiago. Zazpi, a ball of energy, ushered us all into the bar and coffees soon appeared. Zazpi's wife, Esther, slipped through the door and said hello (in Basque) and we were introduced. She was a lovely lady but had to work today so she couldn't join us for the day hike Zazpi had planned to take us back to the "holy place." No worries, Zazpi's son Mikel was on his way and would soon be joining us, and he speaks English. Mikel married a British lady he met in Patagonia while on a hiking holiday with his family. They both now live just outside Vitoria-Gasteiz. He is a fireman, and she is an English teacher, and they have a 2 year old son, Gilen, who was coming along with Mikel to share our day in the countryside. The plan was to spend the morning hiking in the hills and then return to Zazpi's house for lunch before returning to our hotel. We would catch up with Esther later at lunch.

So off we went on foot to meet up with Mikel. In a few minutes he pulled up to the curb and we all piled in. We introduced ourselves and shared some of our story as we drove up to where we would eventually leave the car and carry on by foot. Now. Zazpi, being very connected to what goes on around here suggested we visit a shepherd friend of his who just happens to make wonderful sheep's milk cheese. This is the real deal. One shepherd, perhaps 60 sheep, a shelter for the sheep, and a stone hut for living quarters (and cheese making) is all that we could see once we stepped out of the car. The Shepherd's name was Jesus (honestly), and he turned out to be a another fun guy. He is retired and simply likes tending his flock and making cheese as a hobby. He does it all by himself. The sheep stay up on the high ground for the summer snd then he brings them back down for the winter. He, well actually it was his dog, Kale, who was gathering the sheep up and guiding them into the milking shed, as we pulled up. After a quick look around a table and chairs were produced and nice Basque tortilla (eggs and potatoes) along with a bottle of red and loaf of bread. Jesus joined us after the milking was done. Jesus offered us one of his cheeses to go with our lunch and it was terrific. The next thing we were asking if we can buy some and presto 5 wheels appear from beneath the floorboards in his hut. These quickly get stashed in Mikel's car for the trip home to Agurain and then to Santiago (gifts for friends). We thank Jesus, break down the dining set up and set off for the "holy place." Mikel and Gilen will snooze and wait for us further along the track.

Off we go into a breathtakingly beautiful pastoral landscape. Cows and horses are grazing as we pass close by. They don't even seem to notice us as we move along. we come upon trail markers and familiar waypoints that look all very different with the snow now removed. Zazpi guides us expertly along until we reach the shrine. We spend a few moments offering our prayers for the deceased and Surprisingly Zazpi starts singing a sad Basque song of farewell. So for a few moments the world stood quietly by as we remembered friends, now passed, in this remarkably beautiful place. The rest of our hike took us along the Camino Ignaciano until we caught up with Mikel an hour or so later. What a day.

Once back in the car we drove back to Agurain where Esther was now cooking. Lunch was still an hour off so we walked around the village with Zazpi enjoying its medieval walls, and its clean appearance. After lunch Mikel drove us back to Vitoria where we caught the return train the next morning to Santiago. It was a truly blessed gift of a day.