Today began, as many others have, with a few early rising pilgrims shuffling around trying to get their gear together. About 6:45 our half sleep went on full alert as a piercing emergency signal ordered everyone out of the building in a babel of languages. After a quick reconnaissance it was clear this was a malfunction of some sort and the shuffling resumed (sort of). The problem was that the alarm could not be silenced by staff or anyone else. So an edginess quickly gained traction as the wail of the alarm overwhelmed even the most tranquil souls in our group. Robin and I beat it for the door, with Camino gear flapping in the wind, determined to put as much distance between us and that albergue gone wild as quickly as possible. Even the early morning stillness of the city, could not settle us down, and it was not until we were well out in the suburbs that we stopped for coffee. 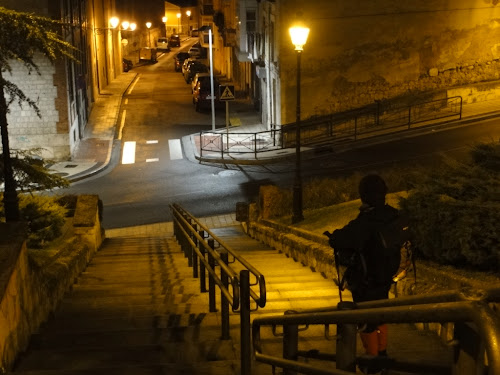 Today we were entering the granary of Spain, the Meseta. This area of gentle hills and broad cultivated fields is either the bane or blessing of pilgrims. Some people just don't seem to like the vast openness of this region. Robin and I love it just for that very reason. The first half of of today's walk was level. The second half was a long reasonable climb up to the Meseta. We arrived on top just before the descent into Hornillos. The next few days will take us up and down and across more of this striking region. We encountered a new group of pilgrims today and eventually caught up with them in the albergue, in Hornillos. There is a father and son from Malaga, and two older guys from Brazil (one with blisters from hell). The son is now living and working as a film maker in San Francisco. We are all snugged around the wood stove, awaiting our turns at the microwave. It seems this group will be together for a few days as everyone's planned stage breaks are looking the same. 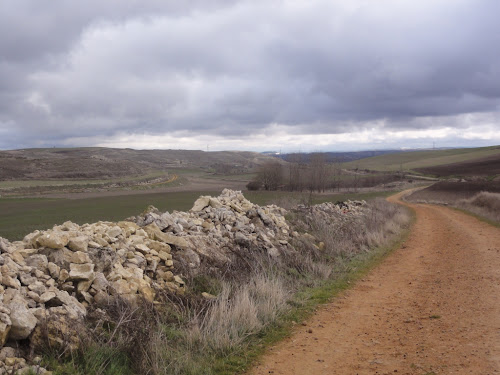 The threatened rain did not materialize today. Temps hovered around 40-45F. The sun only occasionally found a chink in the scudding nimbus, driven by a rising westerly wind that filled our ears with its chorus. It was a perfect day for walking the Camino. Rumor has it that snow could fall tomorrow, but our hospitalera has told us that it is typical, in this region, for the temperature to rise slightly in advance of snow, and we have not experienced that. A good omen? We shall see. Time to put my pizza in the oven. 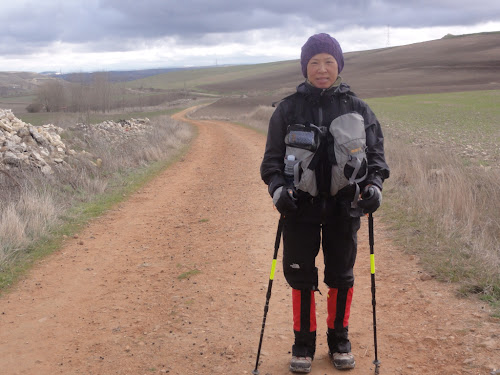 Posted with Blogsy
Posted by Kialoa3 at 6:38 AM