As we peeked out into the early morning half light where darkness was reluctantly giving way to shadows a snowscape began to emerge. It delighted our hosts as this was the first snowfall of the season. I was pleased as the snow looked pretty light and not deep at all. It was on the order of 1-2 inches. We were not concerned as we had planned a short day to Astorga (16kms). Our delightful hosts, Velas and Miriam, joined us for breakfast and got the wood stove huffing. Everything was nice and snug at the Albergue Verde, so it took a bit of internal coaxing to actually get out the door and onto the Camino. Sophie, the French girl who had spent the night at the albergue with us, walked out with us as well. She was a bit ill, and had a huge backpack, but had made it from St. Jean to here, so off after photos all around we finally pushed off. Velas and Miriam suggested the inland route as it is more scenic. I was ready for a change after days of walking alongside the highway, so the inland route it was to be. 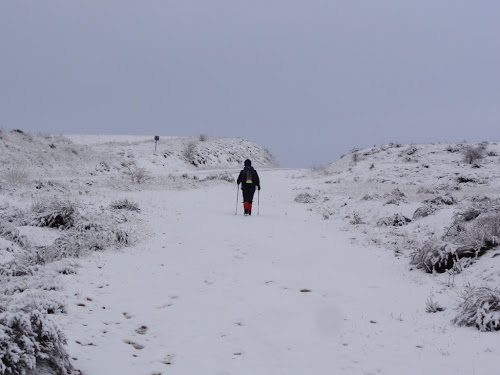 We made our way through two villages, Villares de Orbigo and Santibanez de Valdeiglesia. Once clear of Santibanez the Camino markers became more difficult to find as the snow was a couple of inches deeper at this elevation. We saw some fresh footprints that seemed to follow what we thought was the Camino, and followed them. All was well and we uncovered a few Camino markers boosting our confidence. Eventually we came to a junction. We scraped the snow from it and there was a yellow blob but no distinguishable arrow showing us the way. Our tmystery footprints headed off to the left, so we followed. Long story short, we had taken a wrong turn. Our path quickly transitioned into nothing resembling the Camino. 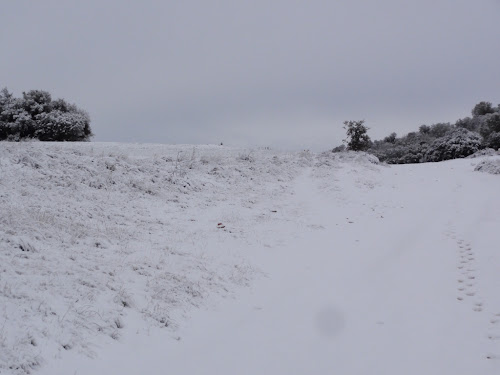 We found ourselves in a patch of scrub bordering a cultivated field. Our now formerly trustworthy footprints had vanished in the wind blown snow. A little hint of panic tried to surface, but a quick assessment of conditions and time of day tamped it back down. We backtracked to our suspect junction just as Sophie snailed her way around a bush and offered that she thought the correct path was to the right. She, of course,was absolutely right. We all set off again in bright sunshine, surrounded by blindingly white fields looking for additional markers to confirm our decision. We slowly made our way up the trail carefully choosing foot placements as all manner of loose rocks and other obstacles were covered by 4-5 inches of snow. As a side note, walking in snow, even shallow snow, is very tiring. It's like walking in soft sand. Just file that away for future reflection. 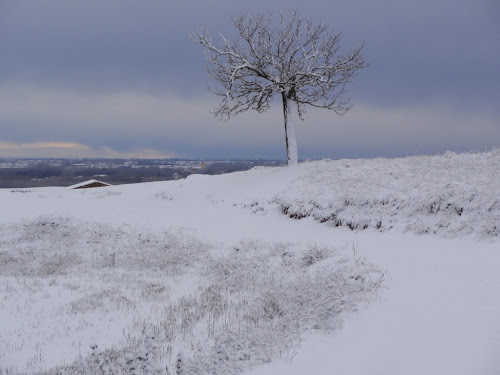 So, our ad hoc summit team leaned into the terrain and inched upwards towards a ridge that should provide a view of Astorga, if we were climbing the correct ridge. Just as a second wave of doubts were surfacing a most remarkable character down from the ridge, bounding through the snow, carrying a shopping bag. He was ecstatic. The snowfall had delighted him and gave force to his mission. The shopping bag was the key. He shouted out a greeting, in English, " where are you from?" He was smiling, and was obviously thrilled to find some pilgrims out on the Camino. We explained where we were from, and he the opened his bag. 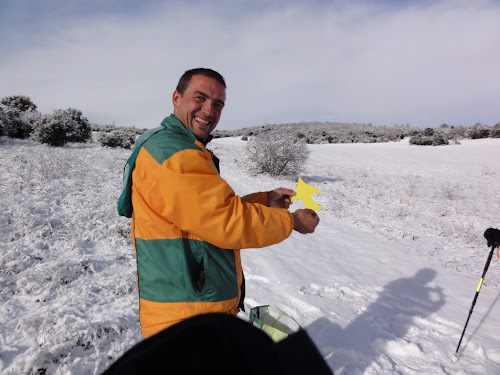 He was carrying a stash of yellow Camino arrows, made from some sturdy fabric, and was walking along placing them at points where pilgrims might become confused and become lost (hmmmm). He told us his name was David, and that he lived in a house, he called, the House of God, that was right on the Camino. He told us that serving pilgrims on the Camino was his life. We thanked him for his work, especially this day, and he moved off hanging yellow arrows as he went. We eventually crested the ridge, and found David's house. He was sleeping rough in a ramshackle lean to. I recalled reading about him as I was researching our first Camino, but had never met him until this morning. What a remarkable person, and what a gift to all pilgrims, especially those in need. As we moved across the top of the ridge, Astorga, that was supposed to be an easy day's walk for us (hah, hah) finally showed itself. An hour later we were having lunch, by the cathedral, and enjoying, yes, a carrajillo. Our destination, tonight, suggested by Velas and Miiam, is the Maragato (local indigenous culture) village of Castrillo, just west of Astorga. We squished through softening snow, footfalls now a bit off cadence, and arrived at our Casa Rural (guest house) in failing light and gathering snow showers. We met our hostess, had a couple of cold beers, and are cleaning up for dinner at 8:00 that she is preparing. We are off tomorrow to Rabanal, moving further into the Montes de Leon. 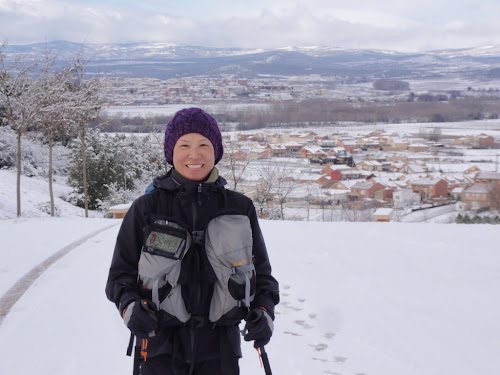 Posted with Blogsy
Posted by Kialoa3 at 9:18 AM