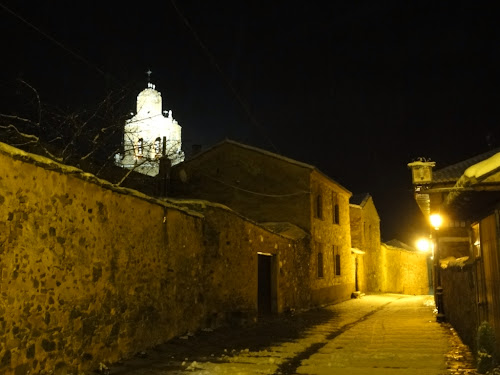 We had a good rest at our Casa Rural in Castrillo. Shortly after rising we glanced out to check the weather, just as a heavy snow shower was unloading over Castrillo. Well, we thought, this is going to be a fun day. When we went out the door at about 9:30, the sun was peaking through and the snow had stopped. Or first stop was at Santa Catalina, for a coffee (make that a carrajillo). This was only about 2.5 kms away. We started out on the Camino our boots crunching with each footfall in the 4-5 inches of dry snow as we negotiated the easy climb to Santa Catalina. After our beak there we pushed off for Rabanal, where we thought we might spend the night. 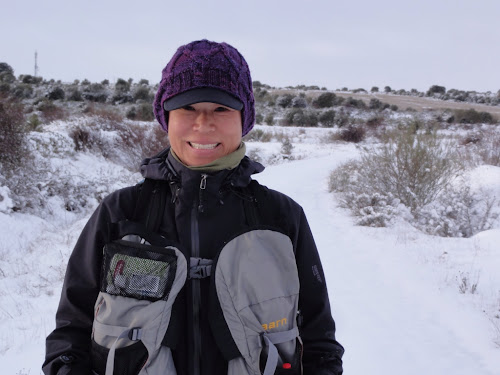 The weather was always threatening, but the snow hung well off in the distance veiling the hills we were walking towards. We walked mostly on the Camino path at first, then later in the day we were forced onto the road due to heavy snow drifts. We moved fairly well over the uneven terrain. Robin broke trail and I tucked into her slipstream as the morning slid by. As we approached El Ganso the wind was having its way with the open fields. Little cyclones whirled about in the fields bordering the Camino gathering light snow into stinging clouds that lashed us eventually giving up their harvest into the awaiting arms of swaying campos scrub to leeward. And so it went through the morning and the early afternoon. We overtook a peleton of pilgrims inching towards Rabanal as the snow finally found us. We gingerly made our way up the main street in Rabanal searching for safe footing in 1 1/2 feet of snow that had drifted in the street. We stopped for lunch and met up with another American, James, who was heading to Foncebadon, the next village 6 kms to the west. The weather looked reasonable, and we had enough daylight so Robin and I decided to join him. We set out climbing steadily into a rising wind, darkening sky and more snow. The Camino was out of the question as snow was thigh deep. We walked the road which was only partly plowed. It was slow going as we slip slided our way up the road.

We arrived at the albergue Monte Irago in Foncebadon at 4:15 under conditions that could best be described as menacing. The road into town was buried under thigh deep snow so we carried on a bit more and found a side alley, that had avoided the majority of the drifting. We squeezed through winding up close to the front door of the albergue. We are now cozy and warm, the gathering menace is now held at bay (at least for the moment). This has been a very challenging day and we are very aware, and thankful, for all God's blessings that have led us to this safe mountain refuge. BTW, a nice vino tinto is now being served. All is well. Tomorrow is anyone's guess. We shall just have to wait and see what the weather decides to do. At the very best we might be able to continue walking the road off the mountain and down Into Molinaseca. If we can do that it will be another long tiring day. Robin, did extremely well today as we reenacted scenes from the movie Lost Horizon. This is new and somewhat scary weather for us on this Camino. Robin has shown amazing resiliency and courage as we shouldered our way through gusty adverse winds and heavy snow. Que valiente! Even as we are safe and joyous inside Monte Irago, arcs of soft yellow fire light continue to fan out, through snow shadowed windows, probing the gathering darkness, a beacon to those few others, on this lonely part of the Camino, seeking shelter from the storm. 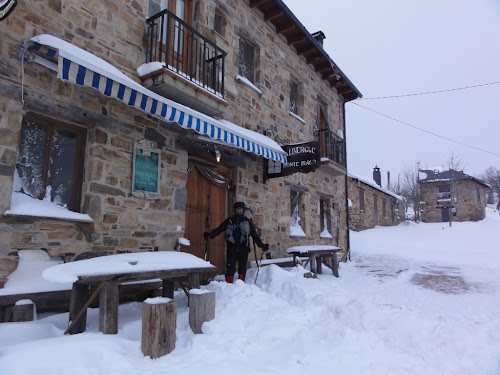 Posted with Blogsy
Posted by Kialoa3 at 9:44 AM