We checked the weather at breakfast in Villafranca, and much to our surprise saw a high at O'Cebreiro of 50 F, and no rain. We filed that away, and set about getting prepared for today's walk. Ruitelan was our destination for now. We eased out the door of our hotel at 9:00 into quiet (dry) streets, and blue sky. The temp was 40F. We ran into a French couple we met at Foncebadon as we crossed the bridge out of town. It seems as though there are a lot of towns, cities, on the Camino where bridges are involved in exiting. We always enjoy starting a day in dry, clear conditions. Today was no exception. Our step was a little quicker and the world just seemed right (at least for us). We made our way up the Valcarce river valley following the road in and out of a variety of villages, enjoying the good weather and an occasional coffee here and there. We kept a good pace and arrived in Ruitelan at about 1:30. Robin and I looked at each other, and considering rain was a done deal for tomorrow, we decided to push on for the summit 10 kms away. 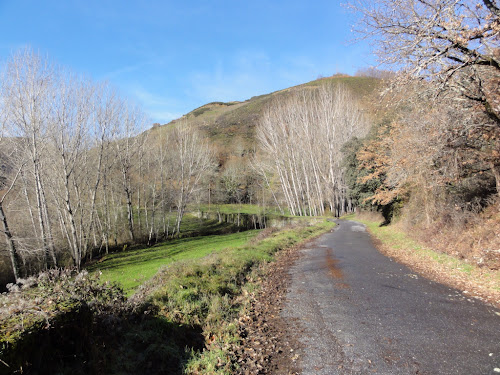 We felt strong and moved easily amongst the villages that lead you to the steep part of the ascent. We made the turn and started the steep climb at 2:15. The heavy snow of a couple of days ago was long gone at this elevation. We pushed on thankful for dry ground and good footing. Up we went, not like a rocket, but making good steady progress. At La Faba we talked to a German girl who said the Camino was impassible just yesterday, due to snow drifts. Today's warm weather helped clear the path, but not entirely. As we pushed past La Faba, en route to the small hamlet of Laguna de Castilla (2.5 kms from O'Cebreiro, the summit), we encountered thigh deep wet snow drifts that clogged the Camino. At this point we were committed, and slowly tried to find bottom in the deep snow. This made for very slow going and deeply carved into our energy reserves that were dropping as the long climb continued. We would go for 25 yards in deep snow and then find some bare dirt. We continued in and out of these drifts until we could almost touch Laguna. At this point there was about 75 yards of the wet deep stuff and we had had enough. Robin spotted a break that led into a bare pasture. We went for that, scampering over stone walls, to get free from the snow. This diversion dropped us off directly onto a clear path to Laguna. We gave thanks for this and slogged on.

As we moved out of Laguna it became immediately clear that the Camino path was still clogged with snow. Fortuitously a paved road from Laguna to the top had been previously plowed and was now bare pavement. We could see that it parallel the Camino to the top. No further discussion, we were off. We still had 2.5 kms to go but the bare pavement lifted our spirits and carried us to the top where we arrived at 4:00. We were not prepared for what we saw. The recent heavy snow, and now cleared roads, had brought out hundreds of families with kids to play in the snow. O'Cebreiro looked like Times Square at New Years. The streets were all jammed with cars parked in any place they could find, the open fields were transformed into winter playgrounds, and the tiny village was simply stuffed with people looking for a away to enjoy Saturday in the snow. Robin and I walked into the midst of this after a 30 km climb, looking not unlike a casting call for an apocalypse movie, and numbly made our way through the crowds to the junta albergue. After a shower, a semblance of humanity surfaced. We went to mass at O'Cebreiro's beautiful Catholic Church, Santa Maria Real. The priest spotted us as pilgrims, and nipped back to the sacristy for a pilgrim blessing just before the closing prayer. Exhausted, starved, but full, of God's grace. We left the church, thankful for all that we were able to do not only today, but throughout this Camino. We were on autopilot as we made our way to a bar that had advertised caldo Gallego, a wonderful Galician soup. As we walks in a local folk group was whipping up the crowd with bagpipes and drums. The Celtic influence in Galicia is significant. Robin and I had a very hearty meal, a bottle of wine, and a shot of Pacharan, and eased back across the snow and ice to the albergue. There are two other guys here, a slow night, but good for sleeping. We are off, down the mountain, to Triacastela tomorrow 21kms away. Sleep time. Zzzzzzzzzz. What a day. 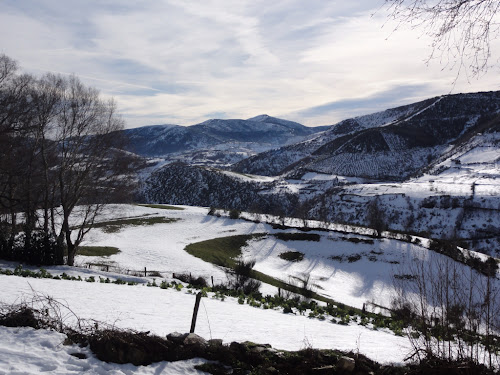 Posted with Blogsy
Posted by Kialoa3 at 10:39 AM