As it turned out we had eight in the albergue last night, 3 Spaniards, 2 Koreans, and 3 Americans. Tonight Robin and I are staying at the Hotel Posada de Portmarin, and are the only guests. It is a beautiful room, with a covered deck, and a great view. We are paying 55 Euros, breakfast included, for a double room. We have found that private double accommodation runs about 50 Euros (mas o menos). Breakfast is a variable, and might cost extra. We paid this in Triacastela for a very small room, and have paid about the same for ultra modern large rooms in new hotels. In general, I have been impressed with the value for hotel rooms in Spain. 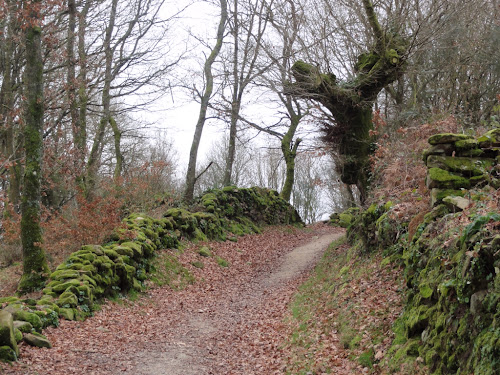 We spent a moderately restful night at the albergue. The two young Korean guys both had those foil space blankets, which crinkled and crackled all night. These things might be great for a moon shot, but in an albergue with a heated floor, and very mild weather, what's the point. IMHO they are noisy and excessive for the Camino. Enough said. We bailed out of the albergue at 7:30 and walked up the street to a bar we knew would be open. Coffee, eggs, and toast fueled us for today's walk. We departed Sarria about 8:45, and headed west. It was an easy couple of kms and then we started climbing, nothing excessive, but more or less continuous for most of the day, until we started our descent into Portomarin.

The weather was fine and dry with partly cloudy skies, and temps around 43F. We enjoyed the cool freshness of the morning as body heat built up as we climbed. We spent a very enjoyable day in the Galician countryside passing through rural villages and enjoying picture perfect pastoral scenes as the kilometers slipped by. We pulled over for lunch at a bar in a hamlet named Ferrerios. There were some other pilgrims already there enjoying lunch. We ordered Caldo Gallego soup, and coffee. It was wonderful. I have to admit that I have developed a penchant for the occasional carrajillo. So, today I ordered one and got a chemistry lesson as well. Usually the process involves making a shot of espresso and then adding in the rocket fuel.

In this bar the process was a bit more substantial. As I was picking up Robin's coffee I saw a fairly large container (8-12 ozs.) aflame on the bar. I had seen this done once before at Foncebadon, but this portion seemed a bit much for one person. I held back and enjoyed the blue flame flickering atop the metal pot. The lady at the bar indicated that my drink would take about ten minutes. I have also discovered that, in some cases, the rocket fuel portion of the drink would be better left to rockets. The trick apparently is that if the alcoholic beverage is a bit too potent (I don't know what official body makes this call) you pour it into a fireproof container and set it on fire. After a carefully measured period of time the alcohol content, now reduced due by the inferno, is deemed fit for human consumption. Who would know? In any event when a large coffee cup was set in front of me, holding a small shot of espresso, I thought well, perhaps they ran out of small cups, but no. The bar lady then whipped around with the towering inferno and topped off the cup. Okay, she is putting me to the test. I nodded my satisfaction and thought there must be six ounces of, who knows what in there, along with a lonely ounce of coffee. I tackled the soup and sipped my carrajillo. When we finally settled up there was still 5 ozs left. Lesson learned, beware of the fire pot. 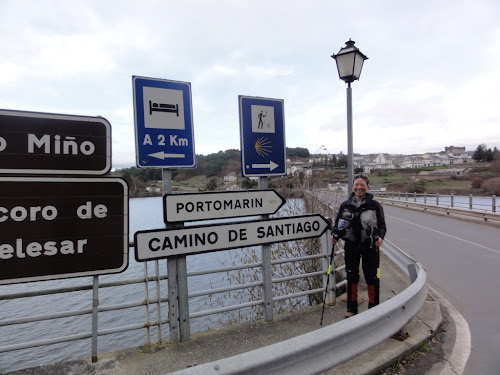 Having narrowly avoided the necessity of a stretcher service, Robin and I, set out for the last couple of hours of our walk. It turned out to be a wonderful conclusion to a beautiful day. I had forgotten how scenic this stage is. Using last night's space blanket attack as a rationale, we sought a room at a local hotel, and discovered that they had a room, but they had this renovation work going on. The lady at the reception assured us that the work work would stop for the day at 7:00, so we became their sole guests for tonight. So far, no problems. One oddity worth mentioning was I noticed that the water supply to the toilet was hot water, not cold. When I mentioned this to the lady who checked us in she said it was better for the winter. Who could disagree, and off we went to dinner, secretly wondering about a toilet that actually steams when flushed. What other wonders shall we encounter on this amazing journey. Stay tuned.

Posted with Blogsy
Posted by Kialoa3 at 12:00 PM