Balmy weather continued to please us as we took leave of Bilbao for Azpeitia around 10:20 this morning. We ended up just going to the nearest taxi rank and found someone willing to drive us to the Loyola Sanctuary in Azpeitia. We arrived in just under an hour and booked into the Hotel Loiola. The Sanctuario Loiola is just a 5 minute walk from our hotel. It is an impressive structure that dominates the small town that hosts it. We walked up and entered the well marked information office which is just to the left of the main entrance to the Basilica. What struck Robin and as we approached the Sanctuary grounds was the lack of any signage indicating anything about the Camino Ignaciano which starts here. Once inside the information office a kind Basque lady, who also spoke quite good English, was manning the desk. We inquired about getting a credential for the Camino Ignaciano and out came a box of them. A payment of one euro closed the deal on two credentials. She stamped them both and wished us luck. Apparently, the buen camino, thing hasn't found its way here. When I asked if there was any additional information on this camino she referred me to the camino website, www.caminoignaciano.org. The website is pretty good, and I am thinking that the best of it could be the maps, and especially the gps tracks, as way marking already appears to be a bit thin. But, it is early days so I will stand corrected if a quiver full of arrows suddenly appears. Here's hoping!

There was a small gift shop attached and Robin picked up a couple of Ignatius medallions for our backpacks. After all no shells this trip as we are not bound for Santiago. The next step was to purchase two tickets to tour St. Ignatius' family home, which is right next to the basilica. Three euros apiece was a bargain to slip back into the home where Ignatius grew up and found his vocation. Very interesting indeed. Part of the home/museum tour contained a diorama depicting many key moments in Ignatius' life. One scene depicted him being carried home (by four men) from his battle injury in Pamplona on a litter. This apparently was a two week journey. I can only imagine the suffering he must have endured with his shattered leg. A final piece of information that caused my eyebrow to raise was a scene showing Ignatius leaving home for Manresa. He was standing next to a saddled horse. Why did I think he walked all the way (my kingdom for a horse). We finished our tour and just had time to step into the Basilica before it closed at 1:00 pm for the afternoon. It is a beautiful church as one would expect. We are heading back at 6:00 pm for mass. We did prowl around a bit looking for the camino path, but couldn't find any markings so I pulled up the gps track for the first stage and bingo it all made sense. In truth the written descriptions of each stage seem to be pretty detailed, but comments on the website do indicate there are places where it is easy to get lost. I hope Orange has good coverage in the hills of the Basque Country as it is their SIM cards we purchased.

And now for the weather.....a cold front is approaching bringing rain and very strong winds. This front will dominate the local weather for the next couple of days. Tomorrow, our departure day, should be okay, but the second, and third stages, both still in the hills, could be hard walking. On the plus side the temperatures have been well above freezing so no snow should be on the ground as we climb up on day two. More on all that as we get into it. Almost time to leave for mass so I will close for now. Tomorrow we start walking....but Ignatius might just have been onto something with that horse. 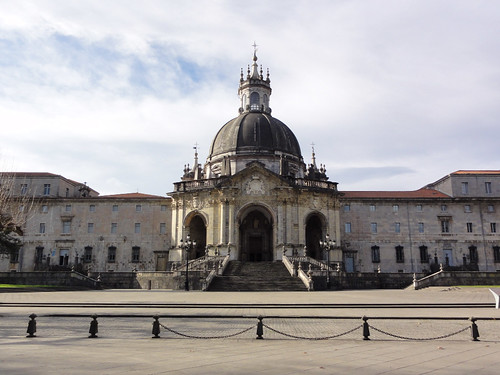 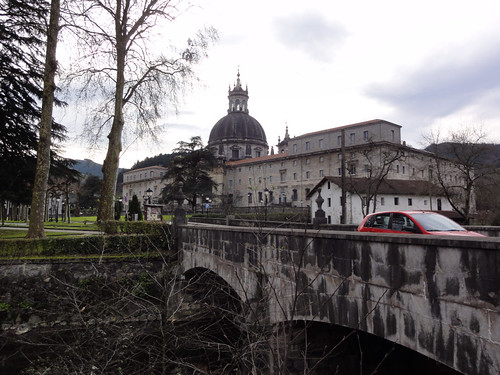 Posted with Blogsy
Posted by Kialoa3 at 8:23 AM