I awoke this morning at 2:30 and punched the pillow until 7:00 when Robin's alarm went off. So much for well needed rest. Today, by all accounts was to be the toughest day on this entire camino. The maximum elevation gain is about 2600 feet, but it mostly occurs towards the end of the stage. I have been conjuring up all kinds of scenarios regarding this stage. Most of them involve once in a ifetime weather events. Nonetheless, in an abundance of caution, we departed our hotel by taxi to the next town down the road from Zumarraga, the small industrial enclave of Legazpi. We asked to be dropped off at the circle just opposite the football field. This reduced our walk by about 4.5 K and would give us some extra time if any of my nightmare scenarios came to pass as we crossed the mountain. For the moment all was looking good. Temps were in the upper 40's F. It was cloudy with some gusty winds, but nothing that was going to blow us over (not yet I might add). So we set out. We spotted a few faded way mark arrows but not much more until we saw our first red and white GR blaze that marked the GR 120, which would lead us to Arantzazu. We plugged along a nice footpath that paralleled the valley road until we came to the reservoir where we took a hard right followed by a hard left once across the dam. Now we were firmly in GR territory. Occasionally we would see an orange arrow beneath the GR blaze. The path was quite nice and well defined. No worries about losing it. Towards the southern end of the reservoir you follow the path upwards and to the right. All clearly marked. This is where the climbing really starts. From here to the summit (Robin's figures by sign posts) was about 5 K, and you gain about 2ooo feet in 5 K of walking. During this climb there is only one short flat bit, the rest is up and up. We left Legazpi at 8:50, were on the summit at the stroke of noon, and arrived at the Hotel Sindika in Arantzazu at 1:45. But I get ahead of myself.

Back to the climb. It was not any worse than what people would have experienced on other Caminos, except for the fact that it just seems to go on and on. But in truth the worst of it happened in the span of two hours. It did remind me of climbing the Hospitales route on the Camino Primitivo. If you have that under your belt this one should be manageable. One significant difference is the fact you will most likely be alone (once we left the reservoir the day hikers disappeared). The terrain above the tree line is pretty daunting and rugged. The trail to the summit in this section is marked well enough (GR blazes on rocks) for good weather, but in limited visibility it would be tricky, and if snow was covering the ground you would probably get lost. Also, the trail boundaries start to lose their definition. Soon you are just moving among a steep field of stones. The further up you go the less distinct the path becomes until you start to feel like you are in Tibet, and not Spain. Just before the summit you are following what would be better described as a crack rather than a trail. It is a bleak but beautiful landscape with gorgeous views (we could see back to Zumarraga). Once on the summit one gets a sense of the Aubrac Plateau on the Le Puy route. Open, barren, intimidating, and stunning. The wind had been building all day and as we scrabbled onto the summit it was blowing hard enough to sweep us off our feet (probably 35-40 mph). I actually found myself trying to stay front up to the wind as I crabbed along in an effort to keep my backpack from catching the wind and knocking me over. Hiking poles saved the day as quick pole plants kept me on my feet on several occasions. I might add that if you fall you will most likely fall onto a pile of rocks and break something. It is a trail section worthy of considerable caution. But, do walk it. On the plus side, no rain or snow fell today.

The descent was gentle at first but eventually steepened. I am usually popping some Advil by now, but today I was okay. The descent was nothing more than what we saw many, many times on the Le Puy route. There is a lot of loose rock in parts, and slick grass and mud in others. If rain was in the forecast then extra caution should be exercised going down. It would be quite easy to slip. Way markings on the upper section are blazes on a few rocks in a field of hundreds. Lower down you pick up markings on trees and poles. There are also plenty of sign boards along this stage with distances and times to go that seemed pretty accurate.

Yes, it was a hard day's walk but it has left one of those special impressions that I sense will linger long after this Camino is done. It was a truly remarkable day. The rain is now falling in Arantzazu so tomorrow's climb out of here (about 2000 feet) could be a bit slippery. But, that will be a story for another day. For now thanks for following along, and good night to all. Perhaps I'll even sleep through till sunrise (I hope). 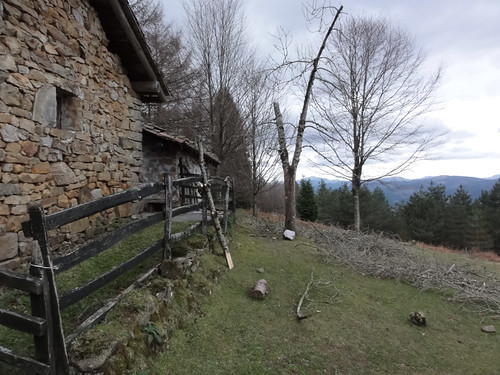 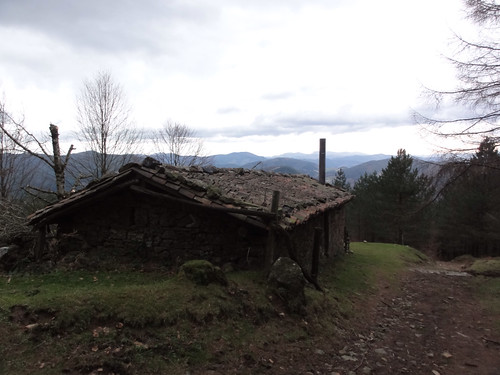 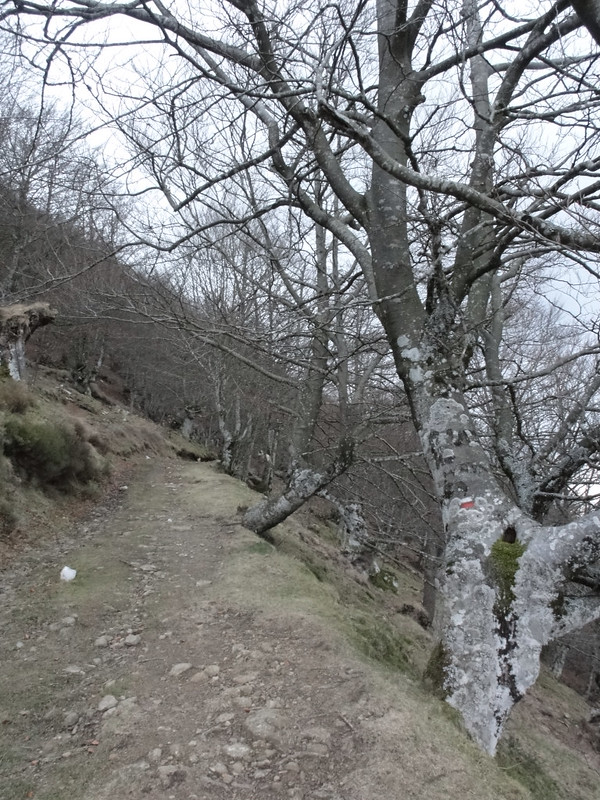 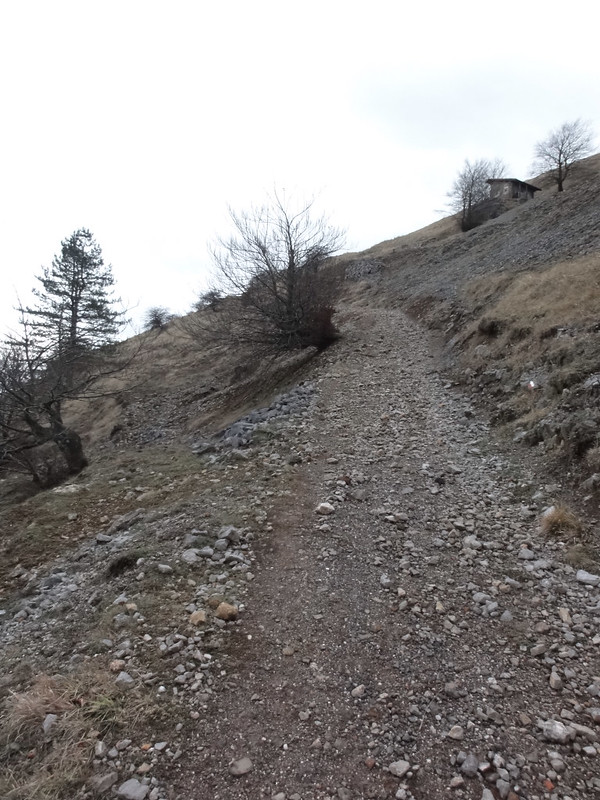 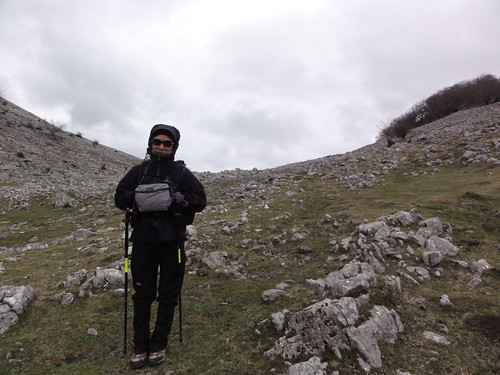 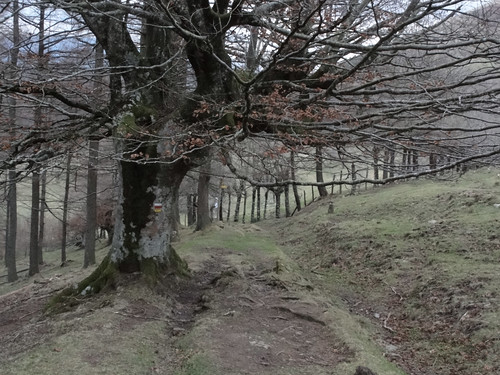 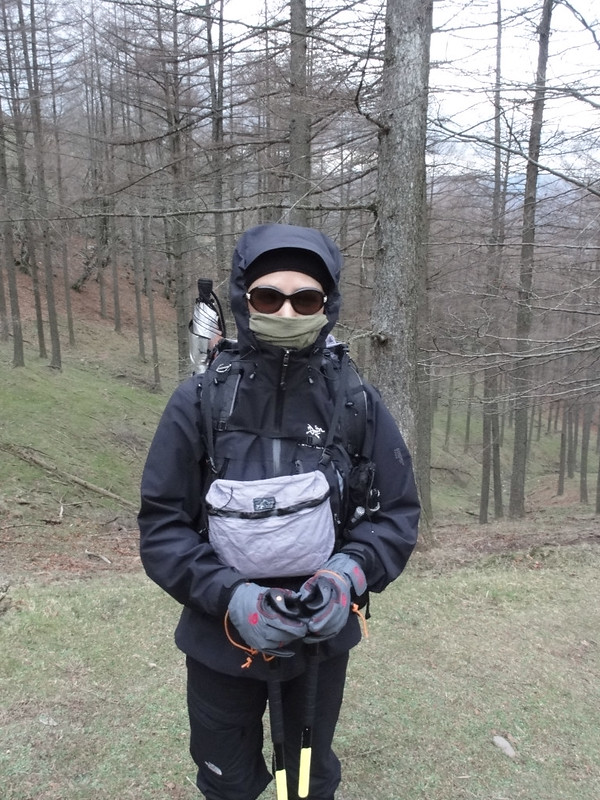 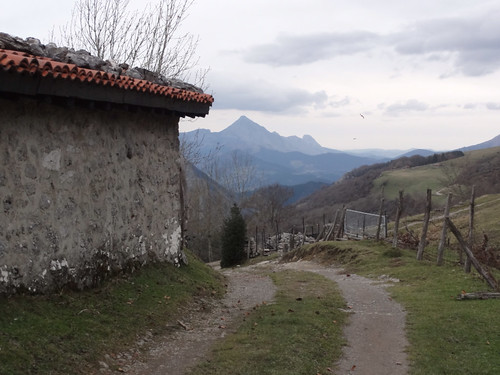 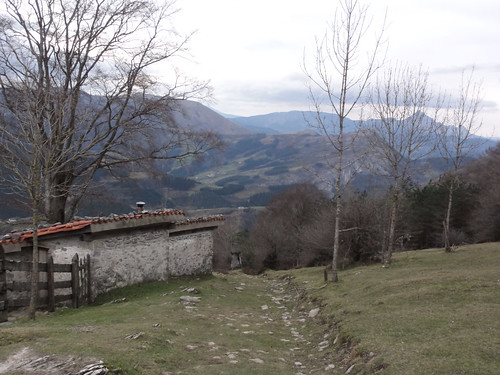 Posted with Blogsy
Posted by Kialoa3 at 10:18 AM