Today was just magnificent. First of all I am a new fan of truck stop hotels. Our stay at the Hotel Andamur in San Roman was great. It was like an albergue with truck drivers instead of pilgrims. About 8:30 we wove our way around long haul lorries and walked the short distance to the trail head in San a Roman. The snow overnight left the surrounding mountains in full dress. What a way to start the day. We got our bearings and started up the Camino path. As always, it seems, the first steps are up. And then a few thousand more. But who is counting? The pitch of the trail was moderate, and steady. The forest was bedecked with light dry snow making the arduous climb a thing of pure joy. It seemed we could not walk more than a few meters without spotting some gorgeous photo opportunity. And so it went, up and up, one more beautiful view at a time. Temps were around 40 F to start and the dropped to the mid 30's, and the rose to the mid 50's as we crossed snow fields later on in the day. One note we picked up from the Camino Ignaciano website was a warning that this trail could be quite muddy. It was only the low temperatures and tha snow cover that saved us from the bogs from hell. In warmer, wet weather this trail could be a real death march due to the mud. But today, the ice held and the snow cover provided just enough cushion and we able to walk over what otherwise would have been shin deep mud. No thanks.

We climbed up and enjoyed good route markings to guide us. On the top we were shuffling along through the snow when we saw two guys slinging their packs. We shouted Hola! and walked over to meet a pair of Jose's, one Luis, and one Marìa. Apparently Luis (nick named Zazpi, seven in Basque) was a true mountain man having roamed all these regional hills since he was a child. They offered to take us along the "new" Camino Ignacianco trail. We agreed and soon we were 6 feet from a 1000 foot vertical plummet into oblivion. Keep in mind that all the time we were walking, we were sliding around on less than sure footing. They didn't seem to notice. However, the views from the brink were breathtaking. The new trail orientation purposely leads you along the cliff edge to enjoy the view. Believe me it worked. We moved along and soon Zazpi pointed out a box on the ground. He bent down, brushed off the snow, and opened the door. He reached in and pulled out a business card that members of hiking associations place there to be discovered by other hikers. The idea is that you take someone's card out of the box and then once home you mail it to back to the members club to prove both you and the member have been there. You should leave your card there for the next person to complete the process as well. All in good fun! Our two guides next asked if we would like to see their "holy place". This is a shrine that they have set up way out on the very farthest point on a precipice overlooking the valley below. Sheer drops all around give this space a special note of purpose and caution. It was here that over the years they have placed the ashes of deceased amigos who also loved these mountains. They both told us that this is where they will end their days as well. They referred to it as the best porch view in the Basque Country. Hard to argue that. Robin had been carrying a prayer card from a family, who are close to us, who lost a young son this past year. She had been looking for a special place to leave it. Robin asked Zazpi if it could be left here and he agreed that it would be a privilege to do so. So Zazpi, of the sure foot, inched out on the snow covered rock (please don't look down) and placed the card in the shrine. What a kind and beautiful moment in the rugged hills of the Basque Country. We then continued on to the point where they had to return to their car and Robin and I, with still another two hours of walking ahead of us to reach Alda, waved goodbye and set off in another direction with our boots kicking up clouds of powder as we ambled along. What a day.

Upon arriving in Alda (very quiet town) Robin called our Casa Rural in Genevilla, while I hopelessly tried to arrange a taxi to Genevilla. Robin got lucky, I didn't. Before long our host arrived and like a rocket we were in Genevilla. He will return us tomorrow to pick up the Camino. Right now we are lounging in front of a very nice fire, wine in hand, and reveling in this remarkable day. 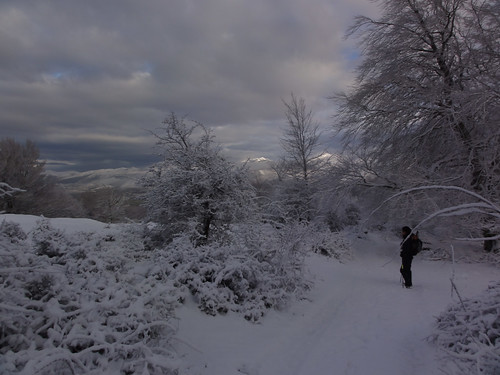 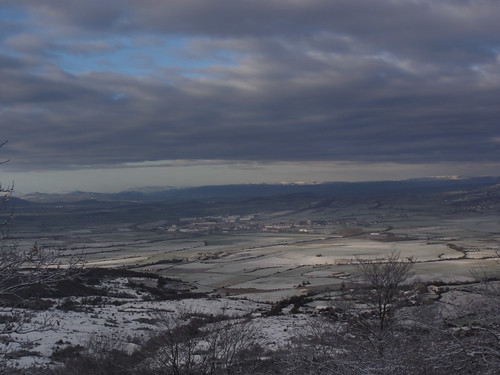 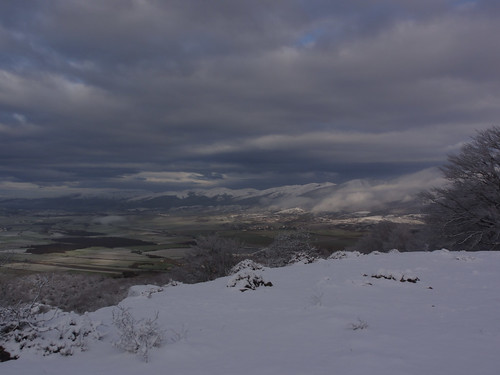 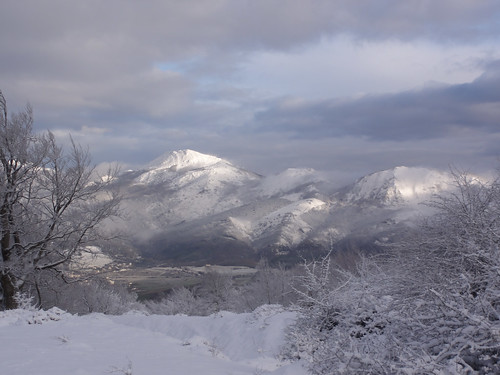 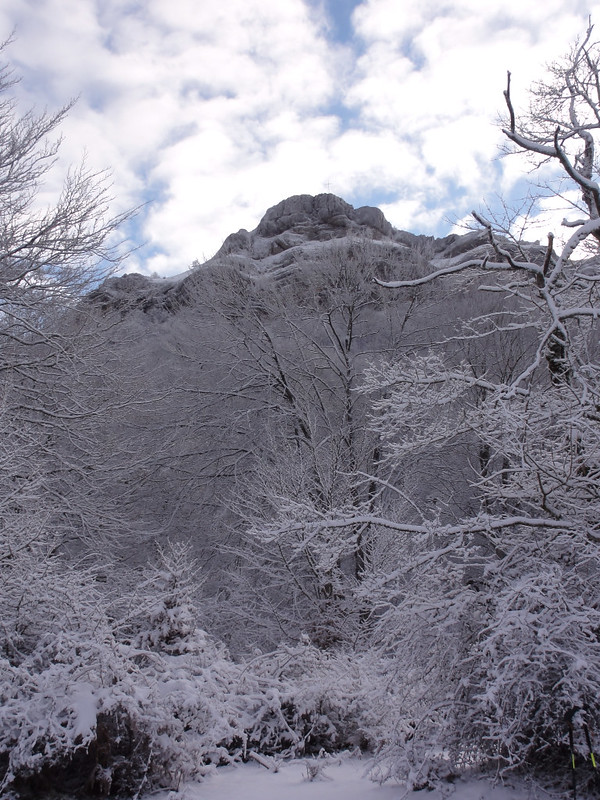 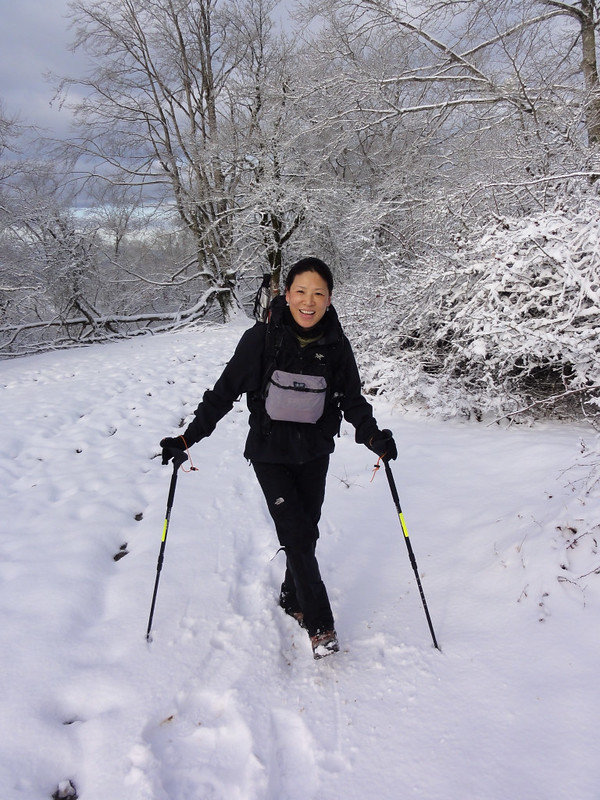 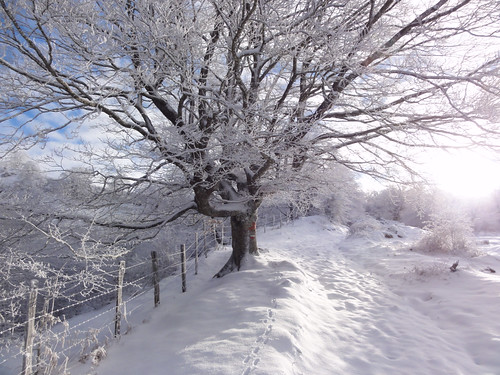 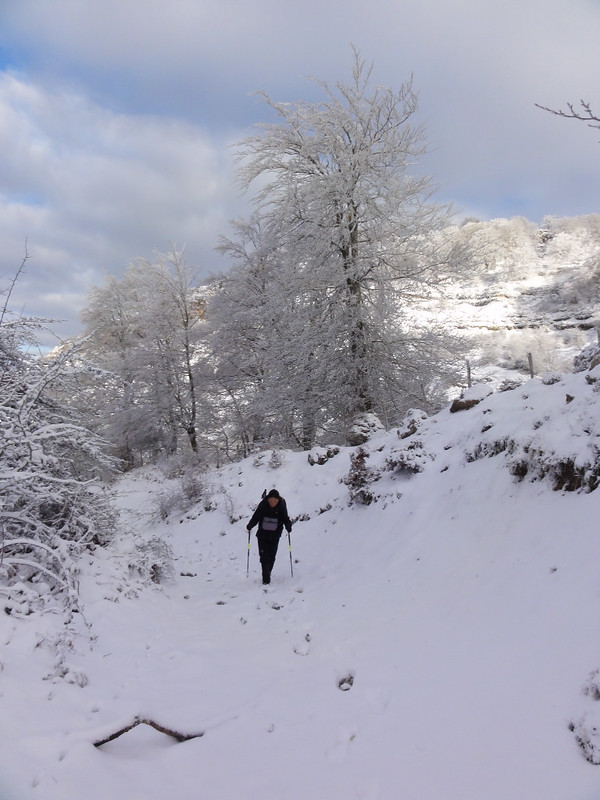 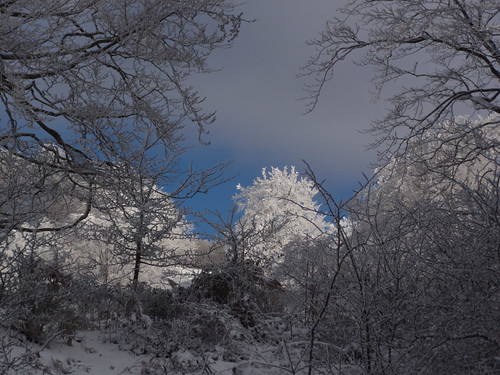 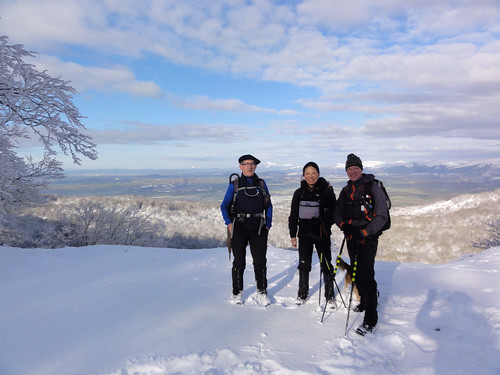 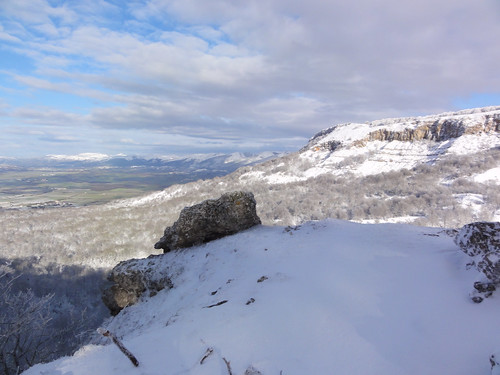 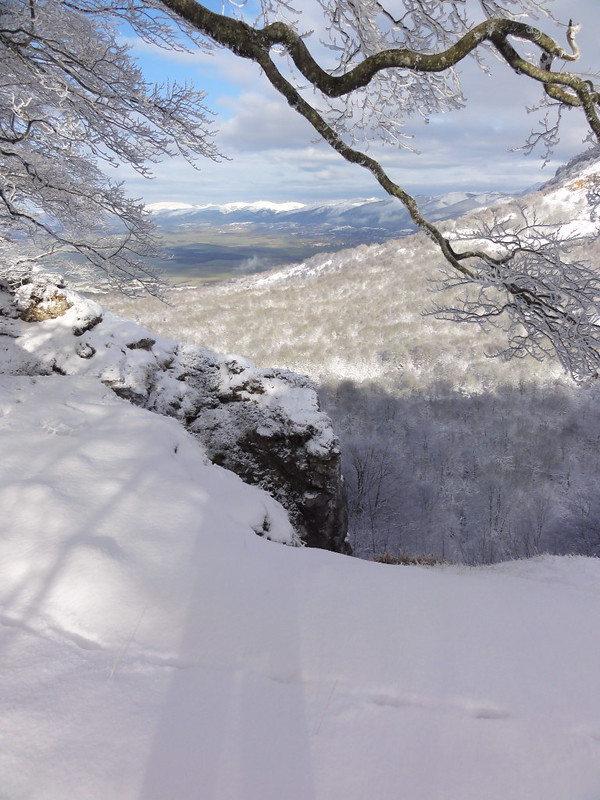 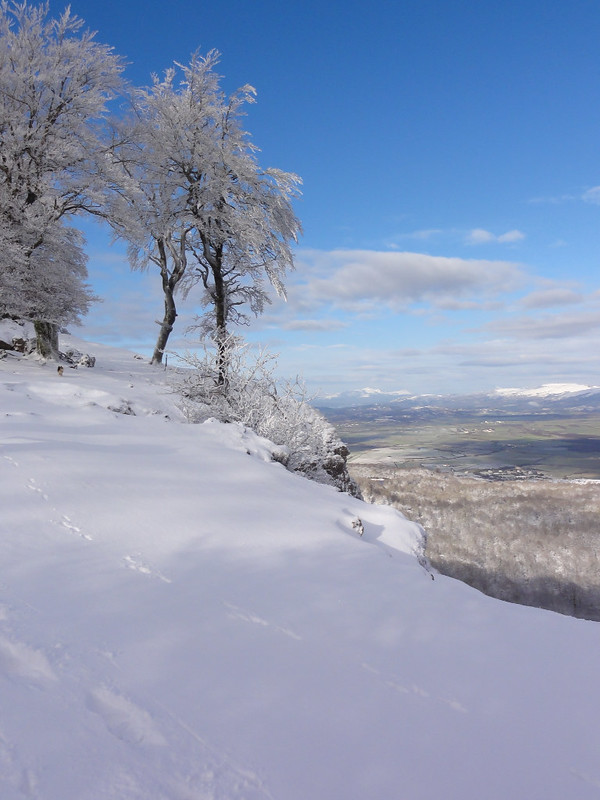 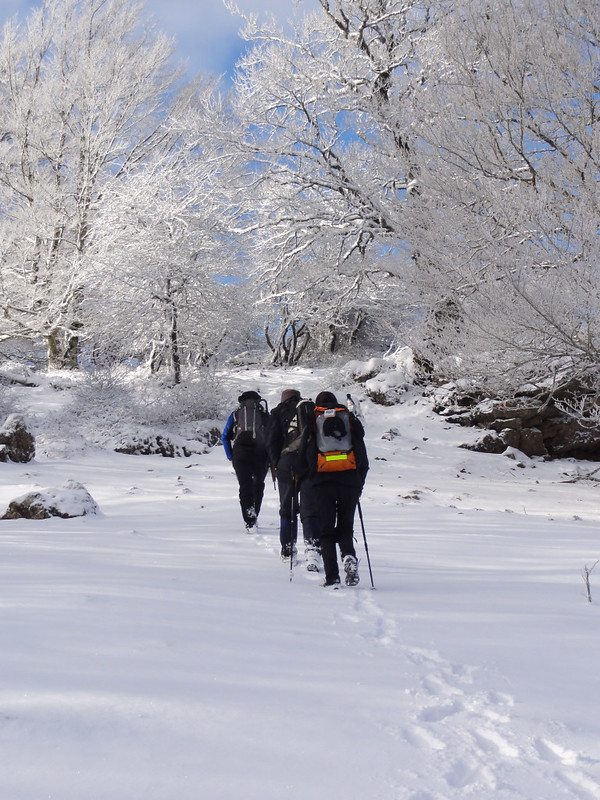 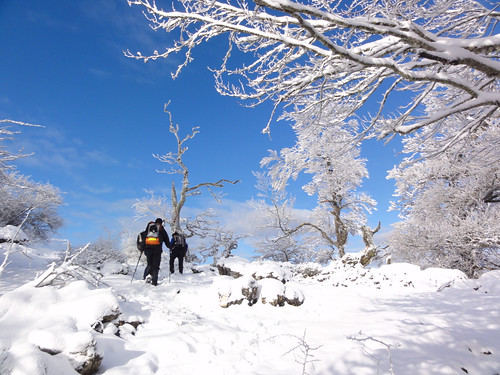 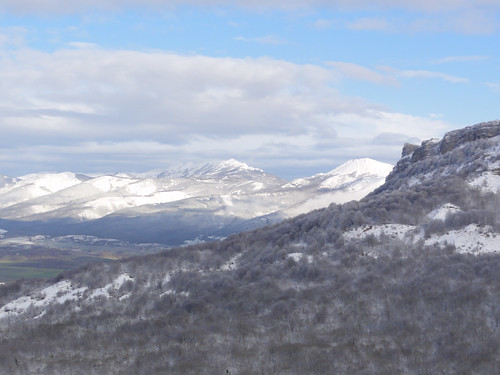 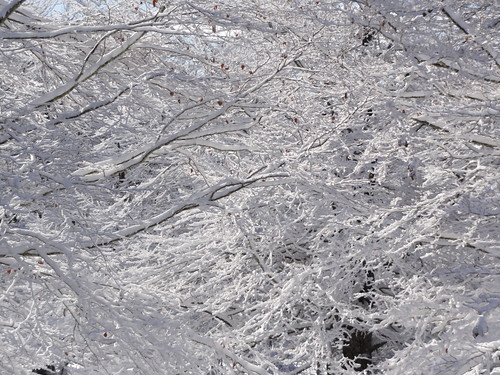 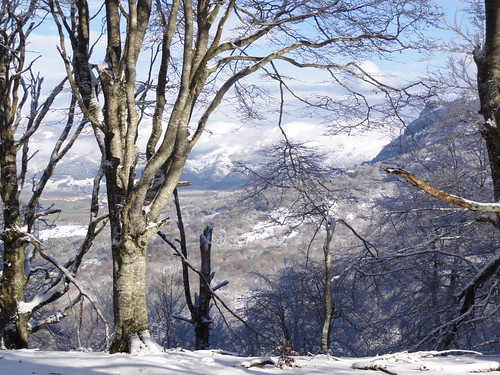 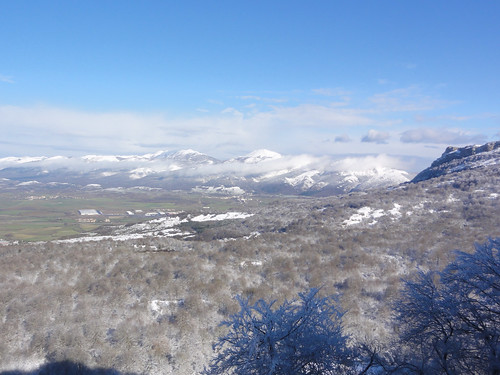 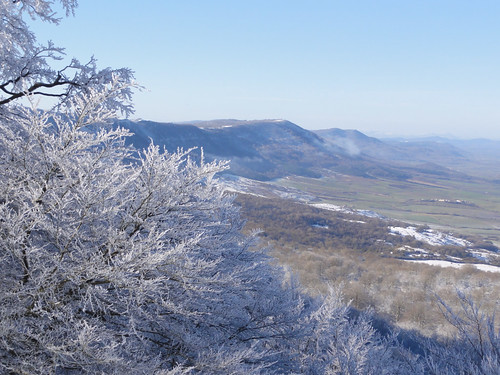 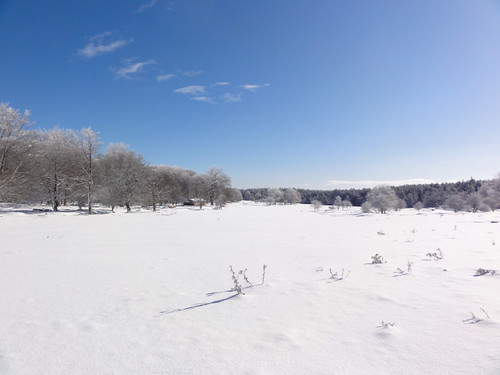 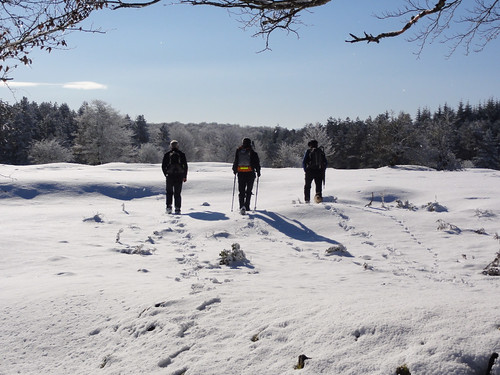 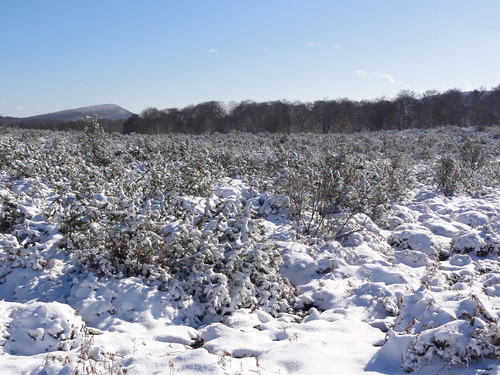 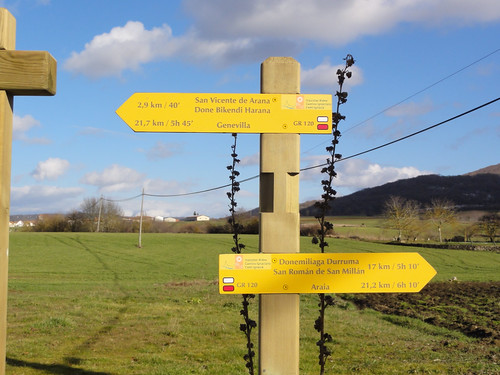 Posted with Blogsy
Posted by Kialoa3 at 10:21 AM