We returned to our hotel last night accompanied by the howl of emergency sirens. Lots of police cars were following us home. As we turned into the street where our hotel was located we could see thick black smoke pouring from a garage entrance directly across from our hotel. The police we on scene and just minutes later the fire department arrived. There was a large block of apartments directly above the fire but no alarms were sounding and no occupants were pouring out into the street. But, the firemen were very organized and entered the garage only moments after they arrived. Still no apartment lights on above the fire, no people looking out windows and no police going door to door to raise the alarm. It all worked out but it seemed a bit casual with regard to the apartment dwellers above the fire. That was our excitement for the night. 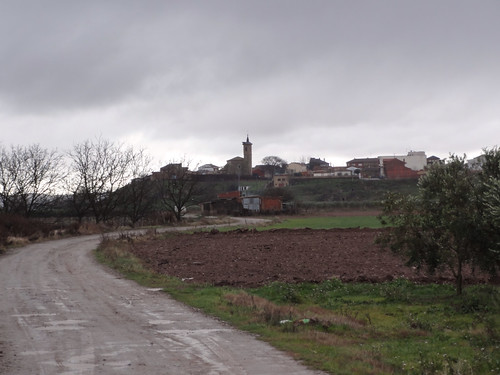 The next morning Robin and I decided to take a taxi to the village of Recajo (10.6 K from Logroño) and begin our day's walk from there. Making our train schedule in Alcanadre was the principal consideration but by doing this we also avoided a long walk out through the suburbs of Logroño. At 8:50 a cab pulled up for us just as a large Audi sedan emerged from the garage that had the fire the night before. It was covered in ash. (must be off to the car wash). By 9:15 we were waving goodbye to our driver and plodding along a busy highway, the N 232. We misjudged our drop off point and had about a mile to walk as large trucks roared past a bit too close for comfort. Relief came from a small paved road that allowed our escape from the motorway and down onto a rural road that was our part of our Camino path for this part of our walk.

We started our walk in a cold rain that only increased as the day drew on. Temperatures were just under 40 but felt colder. Luckily the wind was from the NW, putting it at our back. We settled into what was going to be a 20 K day once the cab ride was subtracted. We felt we had ample time to arrive in Alcanadre before the 2:34 arrival of the train to Calahorra where we're spending the night. We popped our umbrellas and enjoyed a cozy lee from the wind and rain. Just keep on walking. So far we had been walking on paved surfaces, and the rain caused us no bother. Upon reaching the village of Arrubal (with 12.6 K left to reach Alcanadre) we left the pavement for gravel and then muddy tracks. We squished along not quite walking as fast as we had intended but still with time enough to make our train.

As we plodded through the mud a car approached from the direction of Arrubal. One fellow rolled down his window and let us know that the Camino de Santiago was in the opposite direction from where we were heading. We explained (in very broken Spanish that we were walking the Camino Ignaciano to Manresa, much further to the east). They seemed relieved and turned around and headed back from where they had come. Robin felt, and I agree, that these guys had seen us, apparently heading in the "wrong" direction when we passed through Arrubal, and set out to find and alert us to our apparent error. Very kind off them to do that.

We had been following pretty good waymarks but also verified our position with gps from time to time. As we drew closer to Alcanadre the mud got worse and eventually down I went shin deep in a mud puddle. No harm done just pretty dirty, but after a quick brush off we redoubled our efforts to make the train to Calahorra. We arrived at the train station just minutes after 2:00 and joyfully welcomed the train as it glided to a halt to pick us up. 13 minutes later we were in Calahorra walking up the hill to our hotel for the night. We will head back to Alcanadre in the morning and walk back to Calahorra. All in all not a bad day. So far in this trip the scenery has gone from breathtaking to pedestrian as we now find ourselves out in the agricultural flats interspersed with large industrial plants. But, dealing with the good and not so good is all part of any Camino. Today was just another piece that needed to be added to bring us just that much closer to Manresa our final destination, and that is a good thing. Sometimes as pilgrims we need to be reminded that we are not on a tour. The beauty that truly matters is what the journey helps us find within.

Posted with Blogsy
Posted by Kialoa3 at 11:43 AM