I was buried in my pillow when Robin nudged me and said it was 7:30. I pulled out my earplugs and started to move towards the bathroom. It was departure day and it was time to get ready. Anticipating another fog free day I swung open the window shutters only to see, nothing. That is nothing but fog. A thick gray blanket was tucked around the city, and that was that. The upside was that the air temperature was around 36 F. So with all our morning rituals behind us we headed down for breakfast. The dining room was toasty warm and filled with all sorts of delights. We ate more than we should have, lingered over yet another coffee, and finally accepted that we had to step out the door of this cozy shelter and resume our passage to Santiago. And so it happened. Thirty minutes later, with all accounts settled, we stepped out into the streets of Zamora and began to walk out of this wonderful city that we have enjoyed so much.

It was a rather quick effort to clear the city, but what we walked into was anyone's guess. The fog was thick and there was nothing to see except a gray shroud that hung damp, and low, over us as we inched along a non descript gravel path going somewhere or nowhere. Who could be sure? Well truth be told the route was pretty well marked so we were not lost, it just seemed like we were wandering as fog swirled around us. There were times later in the morning when the sun made a valiant effort to reach us, but aside from temporarily brightening the path nothing else changed. It wasn't until we were within a few kilometers of Montamarta that visibility improved. We walked into town and almost out of it before we saw any signs of life. We eventually found the church and the Bar Marce's where the owner had an advertisement posted for the Casa Rural Molino. I rang the number and we were in. Interestingly enough I found out that all 22 beds are booked tomorrow through the weekend. Tonight, Thursday, we are alone here. The owner gave us a tour of the molino, the flour mill, that he has restored. It was quite interesting, and impressive, and at 6:00 pm in Montamarta, it topped the list of things to do. That has capped our day. We are now in familiar repose shifting partially dried clothing in front of the wall heater and sipping some vino. I might add that the señora actually gave us the wall heater control, and for those not familiar with heating costs in Spain, this is sort of like giving the keys to the family car to a teenage son. It is usually done only reluctantly. All in all a great day. Happy to be underway again. 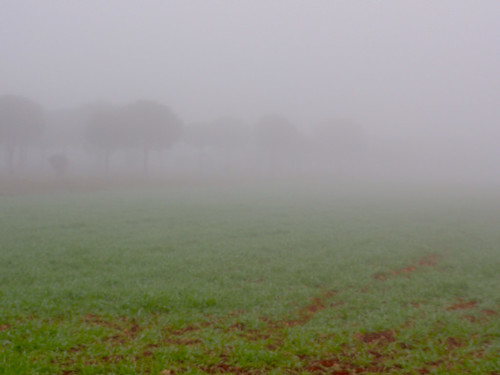 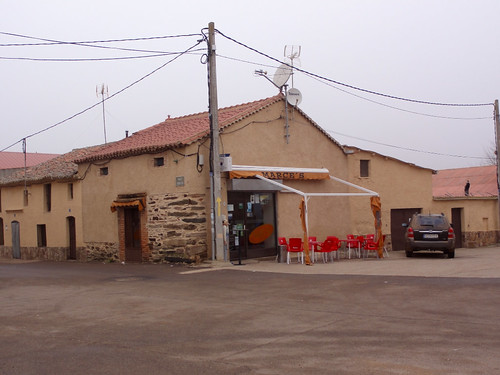 Posted with Blogsy
Posted by Kialoa3 at 10:40 AM